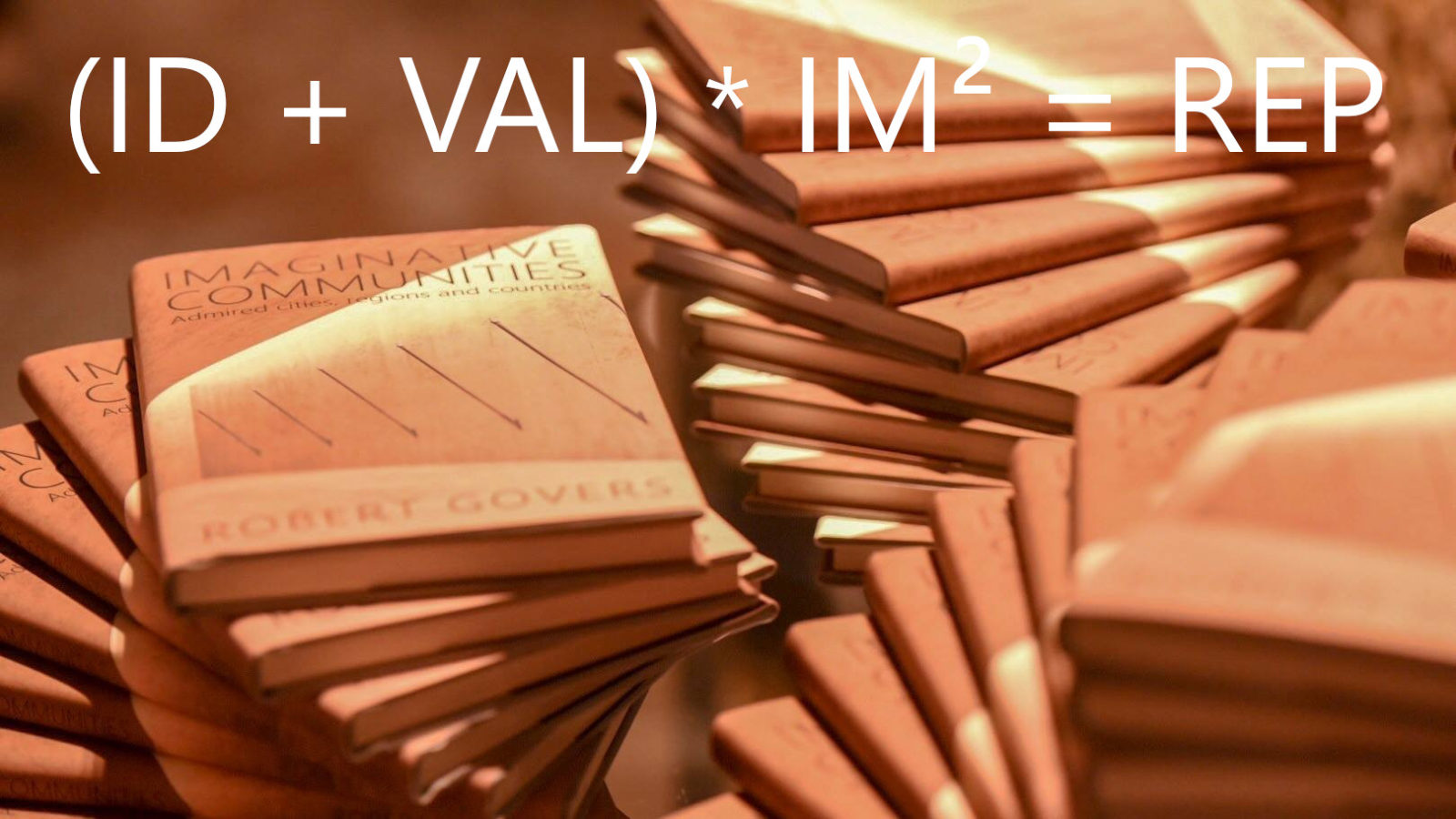 Axel Van Noten, a dear friend and relative of mine, was kind enough to proofread an early draft version of my book Imaginative Communities. The book improved tremendously based on Axel’s suggestions, corrections and input. His most valuable contribution is the following formula that nicely summarises what the book is about. I hope it will help other readers to digest the book’s conceptual contribution.

The whole thing deals with the way in which communities engage with the world and build reputation. When I talk about communities in my book, I mean groups of people that share a geography, history and sense of belonging. So, really, what we are talking about is cities, regions and countries, but also the diaspora and other ways in which people feel connected to place and each other.

Imaginative Communities have a clear sense of identity (ID). They understand what it is that brings people in the community together; how they share a sense of comradeship, belonging and purpose. National, regional or local identity is an elusive and controversial topic. It is hard to define and is often seen as being similar in meaning to concepts such as community spirit, local uniqueness, distinctiveness, local character, couleur locale, genius loci or sense of belonging. Also, identity is obviously not static, but is versatile and often disputed. Rather than attempting an all-encompassing one-liner definition, I decided to elaborate in the book on where community identity can be found. The table underneath is a collage that can be used to find underlying narratives.

Community identities are usually aligned to an underlying sense of morality, virtue or ethics (VAL). France is built on the idea of liberté, égalité, fraternité; American freedom and opportunity on the idea that all men are created equal, that they are endowed by their ‘creator with certain unalienable rights, that among these are life, liberty and the pursuit of happiness’ (‘give me your tired, your poor, your huddled masses yearning to breathe free’). Dubai established itself as a regional sanctuary of open-mindedness and diversity, the Dutch city of The Hague as the city of peace and justice. Germany’s Gründlichkeit is built on the virtue of hard work. Kazakhs tread lightly on the earth; London and New York City embrace diversity, Bhutan happiness and the Cantonese loyalty.

Such virtues not only build community but also appeal internationally.

Imagination is about looking at what we have (ID) and how we are being challenged (VAL), in order to imagine alternative futures. It is our ability to come with original, creative, innovative, captivating and inspiring solutions and initiatives (policies, programmes, projects, investments, events) that create new experiences. Imagination also requires courage as trying new things, by definition, is about taking risk. Yet, we need all this in order to build community and address challenges, but also to stand out. Imaginative initiatives captivate external audiences and contribute to distinctive, memorable and relevant storytelling through action communication.

So imaginative communities create the stuff that journalists, online influencers, bloggers and locals (as online ambassadors) are eager to talk about and that provides shareable content, the kind of engaging buzz that people want to share on social media. This imaginative “action communication” exploits the media multiplier effect by setting the media agenda and exploiting technology; in the form of social media, but also virtual reality, gaming and other immersive experiences. The trick is to activate all media channels and the only way to do this is to create shareable experiences through imaginative action reflecting local uniqueness and values.

All of the above, taken together, builds reputation; the collective perception that outside audiences have of the community. Reputation is the aggregate of multiple images over time, which includes people familiar with the community as well as media representatives. These are shared perceptions and average evaluations (i.e. both an aggregate image and an average attitude over time) by the general public, including somewhat informed groups and people with experience. Hence, reputation includes assessments of awareness; i.e. recognition or prominence. It is built through action, not words, by creating relevant imaginative initiatives that come from somewhere and exploit the media spotlight.